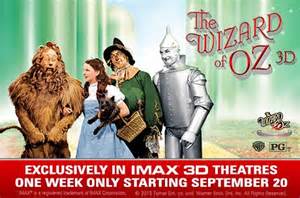 Originally released in 1939, the iconic movie, The Wizard of Oz has been digitally re-mastered and released in IMAX 3D in celebration of its 75th anniversary. In an experience like no other, you can see this classic adaptation of L. Frank Baum’s story of a Kansas girl and her dog who travel over the rainbow. It’s only out for a limited one-week engagement, so don’t wait. It’s the movie that made Judy Garland a household name and until now you’ve probably only seen it once a year on television.

The film will run from September 20-25 in four Twin Cities theaters. Check with the venue near you for showtimes.