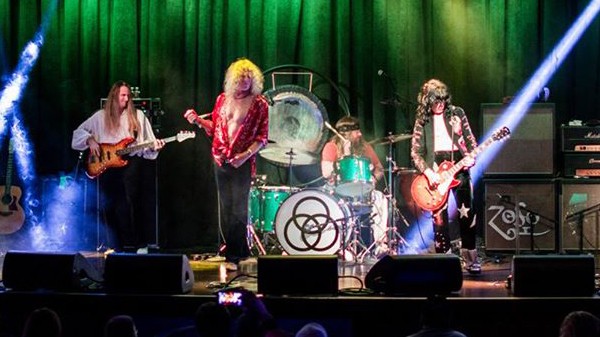 If you are a Led Zeppelin fan and like most of us, did not get to see them perform in the 70s, now is your chance to experience the band with the tribute group Zoso. The St. Petersburg Times calls Zoso “the most exacting of the Zeppelin tribute bands in existence.” Zoso will performing on Friday February 20th at Mill City Nights.

In 1995, Zoso was formed to create the most mesmerizing and accurate portrayal of “the biggest band of the 1970’s” – Led Zeppelin (Rolling Stone Magazine). Each member was selected to portray both the appearance and playing styles of Robert Plant, Jimmy Page, John Bonham, and John Paul Jones. Zoso almost immediately developed an outstanding regional reputation and were awarded “Best Tribute Act inCalifornia” by Rock City News.

In 1999, Zoso began touring nationally, playing a remarkable 2,400 live performances, honing their show to become one of the most musically and visually rewarding acts inNorth America. Their passion, musical ability, showmansh and precise attention to detail earned them critical acclaim, name recognition and a large loyal following. The Los Angeles Times hailed the group as being “head and shoulders above all other Zeppelin tributes,” and the Chicago Sun-Times declared Zoso to be “the closest to the original of any tribute.”

Every year since its conception, Zoso continues to play 150 – 180 high profile concerts at performance arts centers, civic centers, theaters, festivals, and universities. Since 2004, the band has been working on numerous shows with Live Nation including a rotation of 9 House of Blues venues. The four permanent members’ mastery of authentic vintage instruments coupled with spot-on vocals, guitar, bass, drums, and keyboards, their compelling stage persona and distinct Led Zeppelin sound, with astounding visual imagery recreates the music, magic, and mystery of a Zeppelin concert. Each of the timeless hit songs performed in their sets are known and loved by generations of fans.

Twin Cities, we hope to see you at Mill City Nights rocking! 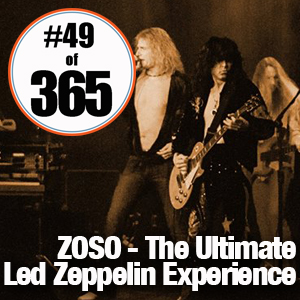