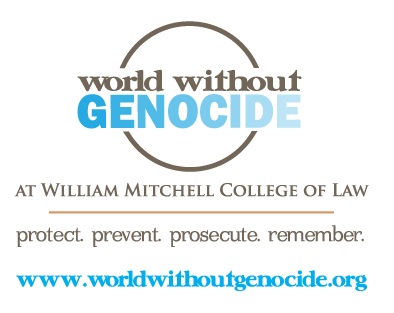 World Without Genocide is a nonprofit organization headquartered at William Mitchell College of Law in St. Paul. World works to protect innocent people around the world; prevent genocide by combating racism and prejudice; advocate for the prosecution of perpetrators; and remember those whose lives and cultures have been destroyed by genocide. These goals are achieved through education and political advocacy at local, state, and national levels.

World strongly believes and advocates that “Knowledge is not power. Knowledge plus action equals power.” Knowing about genocide and human rights atrocities is not enough. We have to actually do something. A bystander is someone who knows something bad is happening and does nothing. World advocates for ordinary citizens to become Upstanders rather than bystanders.

World is sponsoring a program series this winter about ending human trafficking, a form of modern-day slavery that is the second most lucrative crime after drug trafficking, generating more than $32 billion in annual revenues and enslaving an estimated 27,000,000 people globally. Minnesota has the 13th-highest proportion of trafficking in the U.S. Events in this series include the following:

• Thursday, February 21, 2013, 7:00-9:00 pm, Film and discussion, “The Whistleblower” based on the true story of Kathy Bolkovac, an American serving as a UN peacekeeper in Bosnia after the 1994 genocide and her discovery of a network of corruption, sex trafficking, and violence. Open to the public; no reservations necessary. Free to students, $5 seniors, $10 general public. At William Mitchell College of Law, room 245 Auditorium, 875 Summit Avenue, St. Paul.

World is offering free admission to both March events for 365 readers if they mention this post – ‘Sexual Violence against Jewish Women during the Holocaust’ on March 18 and ‘Human Trafficking: From the Global to the Local’.