It’s the weekend! And the forecast calls for snow on Saturday, and c-c-cold on Sunday. So here’s our picks for the coolest event to keep your Twin Cities family busy! Namely, the U.S. Pond Hockey Championships at Lake Nokomis in Minneapolis. Seven different championships played the way hockey was meant to be played, a uniquely Minnesota tradition for eight years. It’s awesome, and it’s free to watch. 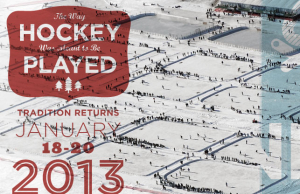 To understand the significance of a “pond hockey” tournament, you’ve got to appreciate the deep meaning of pond hockey to men and women who grew up in cold-climate states such as Minnesota.

Pond hockey enthusiasts grew up playing hockey on frozen ponds in their back yards, on a neighborhood creek or in a local park. They cleared the ice with shovels, not zambonis. Instead of $149 pads, they protected their shins with old magazines held with duct tape. Wooden boards with small holes served as goals, eliminating the need for a goalie. No frustrated parents on the sidelines berated the coaches or the kids.

It was hockey the way nature intended –– outside in the elements during the absolute coldest time of year.