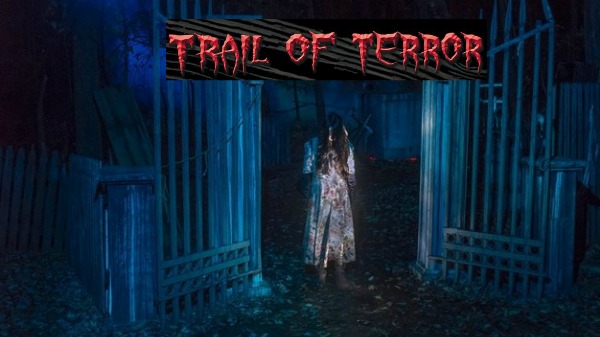 Last night we went to Trail of Terror in Shakopee, and let me tell you folks, the most frightening and soul-razing part of the evening was my driving. Which is not to say that Trail of Terror is wanting in any way, but my driving certainly is. I’d make Helen Keller look like Mario Andretti. My wife was clawing at the dashboard and shrieking like a cheerleader the whole way there. And on top of that out of hubris I decided that maps are passé and I winged it.

For reference, here is the proper route to Trail of Terror from Minneapolis: 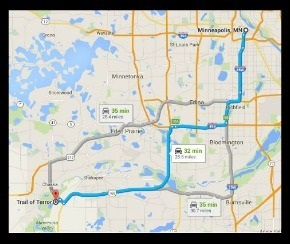 And here is the route I improvised: 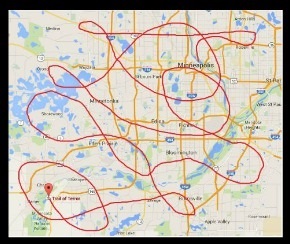 So, 800 miles and three nearly marriage-ending arguments later, we got to Trail of Terror. The long ominous dirt driveway really accentuated the spooky mood. We parked and got out and loped over to the ticket line. It was hard to hear the guy at the counter with a 10 foot tall animatronic troll screaming in my ear.

In we went to take in the sights.  There’s a festival atmosphere at Trail of Terror, rife with entertainment, bonfires, and kiosks selling corn dogs, pork chops, and gyros in case you didn’t fill up your grease reservoirs at the state fair.  A karaoke stand desperate for extroverts pelted out the latest country music tunes from the center of the grounds.  And you know what they say about country music: play it backwards and you get your wife and job back and then your dog gets un-run over by a truck.

New this year was a real live dire wolf.  I get the connection — wolves, Halloween, “what big teeth you have,” and the horrors of the Black Forest — but the effect was lost on me because I love wolves and if not for her cage I’d have climbed in there and bothered the poor thing.  They scattered bones around her cage for effect but the gentle little girl was darling and I should have taken her home. 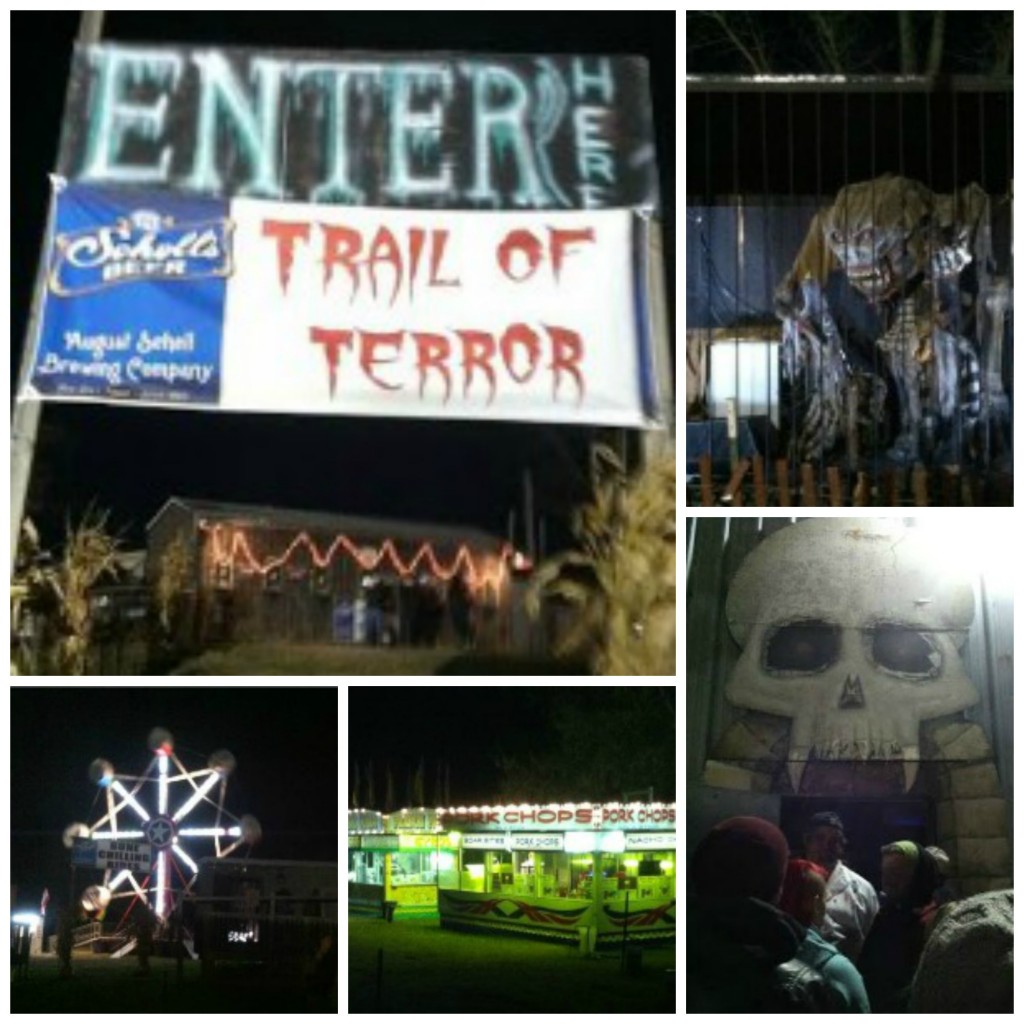 There were optional added price attractions: an escape the room thing, mechanical bull rides, and some zany contrivance where you could encapsulate yourself in a bubble and sprint into other people, knocking them over.  Wild stuff!

It all looked like a blast, but we were there with a singular purpose in mind: getting spooked.  We walked over to the haunted woods, the outdoor attraction, first.  En route we encountered a lady imperiously sauntering in the same direction as us, pork chop in hand.  She informed us that she wasn’t there to be spooked — rather, she lived in the house next door and enjoyed this only time of year when takeout food is within walking distance.  Why am I telling you this?  I don’t know!  Write to the editor and complain about me.

The line was mercifully short at 7:30 so we scooted right in.  We didn’t get far until we were assaulted by professional ghouls (no touching of course, just artful looming and screaming).  I’m like a rock, but my wife got a third degree case of the willies.  The haunted woods are next to a clear, still lake, beautiful in the moonlight.  This year the establishment had installed a laser contraption that freckled the treetops with green.  Gloomy statues, tombstones, and a mock crematorium complete with an audio loop of tortured sobbing made an already idyllic evening perfect.  Do you know what I like about haunted forests?  Absolutely everything, and this one appealed to me in full.

So, having been spooked, we ventured on to the main indoor attraction: Hotel 666.  I think the name of it may be an allusion to the number “666,” often associated with Satan.  We don’t condone satanism at 365 Twin Cities, unless it’s to do with cool haunted houses, and this one certainly qualifies.  I was mainly surprised at just how long Hotel 666 is.  Every turn brings a new themed room brimming with props and more people whom you can see actually enjoy startling you.  They went for my wife like moths to a bug zapper.  The poor thing’s nerves are glowing like live wires this morning.  The spooks are clever too — one of them called me “professor” a bunch of times because I was wearing a beard and a pendleton jacket.  Joke’s on her, I’m actually stupid, but it was like being haunted by a 17 year old Don Rickles for a few seconds!

After that we checked on the dire wolf again to make sure that she was still cute (she absolutely was).  Then we checked out the smaller, trailer-sized haunted houses.  Each of these little things has an overarching theme like prison, bat cave, restaurant — you get it, it’s great.  They were all good for a scare or two, with the clown themed pizzeria the most unnerving.  After that we left because it was 9 and if our parents found out we were staying up that late we’d get in trouble.

SO: how does it rank?  Should you go?  Absolutely, don’t be a boor.  I was blown away by the pageantry of the sets, the genuinity of the people hired to sneak up behind us and scream, the cute wolf, and generally just the feel of Trail of Terror.  In a world plagued by saccharine, safe, “think of the children” attractions where everything is rounded and dulled so as to minimize the risks of lawsuits, it’s refreshing to go to a place that feeds you beer and prods you into the woods so creeps in corpse paint can sneak up behind your wife in order to give her an aneurysm.  It’s real good fun.  I don’t care how old or mature or beset on all sides by adult responsibilities you are, go pay respect to the Halloween tradition courtesy of some of the best in the business.