You are here: Home / Charitable Events / The HOM Teal Strides for Ovarian Cancer Walk/Run on Sept. 12 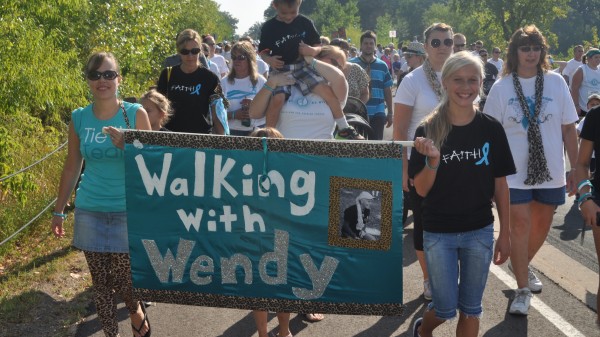 In the summer of 2013, Local musician Bo Weber experienced a monumental set back. After a two and half year fight, his mother Wendy died of Ovarian Cancer at the age of 50. Wendy was his biggest supporter in all he did, especially his music.

Feeling a bit lost, Bo fell back on the music his parents listened to when he was a child. “It was the inspiration I was looking for.”, Bo said. “Eighties music has always given me a nostalgic feeling. I my goal is to capture that feeling.”

Bo soon left his hometown and began living in an apartment in Minneapolis, where he began submerging himself into his music even further. I felt that if I were to grow as a musician, it was necessary to surround myself with a community of people who have similar aspirations.

It has been two years of woodshedding with new sounds in his home studio, and his first single to come out from under the dust is titled, California Babe. “I wrote California Babe for my girlfriend, Emily. She is originally from Bakersfield, California and has always wanted to move back there. So, I did the best I could and took her on a trip to California.” Watch the music video here: https://www.youtube.com/watch?v=zku6il7VQXM

Bo recently launched a kickstarter to help fund the release of his album. Help Bo’s first album come to life by donating to his Kickstarter campaign here: http://kck.st/1IOaIRF

Bo says, “Creating music is my way of healing. It helps me express myself and recover from events in my life that have been difficult to accept.”

Bo’s mother Wendy attended the yearly Teal Strides for Ovarian Cancer Walk for the last two years of her life. Wendy’s wish was to spread awareness of Ovarian Cancer, in hopes to save women all over the world from this terrible disease.

Join Bo and his family Saturday, September 12, for a walk in memory of Wendy Weber, and the many others who have been affected by Ovarian Cancer. The HOM Teal Strides for Ovarian Cancer Walk/Run will be held at Edina’s Rosland Park. Each year, thousands turn up to walk, run and raise funds for ovarian cancer research, raise awareness of the disease, and give support and hope to women and families touched by ovarian cancer.

This event includes a 5K run or 2K walk around Edina’s Lake Cornelia, a Kids’ Fun Run, an engaging program, our annual group survivor photo and more. If you can’t join us, donate to a team or register as a Teal Strides Sleepwalker!

As we mark the 16th year of MOCA’s always-inspirational event, we encourage you to register, form a team and fund raise to make a difference with us as we make Teal Strides against ovarian cancer!

With your help, more than 1,000 survivors and 45,000+ donors, members and supporters have a place to ask questions, be inspired, meet other survivors and support the necessary research to find a reliable early detection test and ultimately a cure for ovarian cancer.