You are here: Home / 2015 / The Gospel According to St. Mark Featuring Tom Stolz at Chanhassen Dinner Theatre

This traditional Easter telling of the Gospel According to St. Mark is an event for the entire family. Listen to the story of Jesus through the sound of one man’s voice and the words of the King James Bible.

Since Tom Stolz first performed his moving recitation of The Gospel According to St. Mark in 1984 at the Old Log Theater, it has become a beloved Lenten season tradition with Twin Cities’ audiences. Without props, costumes, or sets, and totally dependent on the rich, beautiful language of the King James Bible, the story of Jesus is reborn in the hearts and minds of the audience.

Originally directed by his father, Don Stolz, local theatre legend, and founder of the Old Log Theater, the tradition continues at Chanhassen Dinner Theatre with a premiere on Palm Sunday, March 29, 2015 on the Fireside stage.

Tom Stolz is a veteran actor and former member of the Old Log Theater, where he performed in over 150 productions. Tom is also the founder of Promised Land Productions, which is dedicated to spreading the Gospel message through the theater arts. Since 1984, Tom has performed his one-person presentation in churches, colleges, art centers, prisons, and theaters throughout the United States, Canada, Switzerland, and last year in Jerusalem. Tom believes that the good news message of Mark’s gospel is not only powerful theater, but also a welcome balm to society during troubled times. He presents The Gospel According to St. Mark as a message of love and hope to the world.

This presentation is one that people of all ages will enjoy. Performed in 90 minutes with one short intermission, tickets are priced at an affordable $20 per person. The performance begins at 3:00pm.
Dinner is served immediately following the performance for an additional $15 per person as an option.
For reservations, call 952-934-1525 or go to ChanhassenDT.com 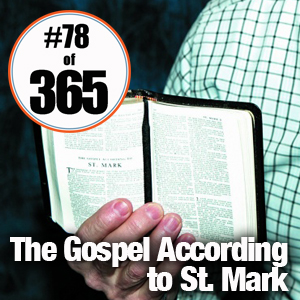