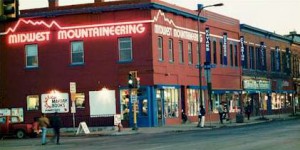 Despite what outsiders may think, Minnesota is not part of Canada. It is, however, close enough that Midwest Mountaineering in Minneapolis is among the first stops for the Banff Mountain Film Festival World Tour.

The festival, held annually in Banff, Alberta the first week of November accepts more than 300 films each year from all over the world. Of these submissions approximately fifty are chosen as finalists, with the big eight awarded in the following categories: Grand Prize, Climbing, Mountain Sports, Mountain Environment, Mountain Culture, Short Mountain Film, Feature-Length Mountain Film, and People’s Choice.

Twenty-eight amazing, beautiful, adrenaline-pumping films are touring this year, and you can catch them all next weekend at Midwest Mountaineering’s Outdoor Adventure Expo!

Cold, this year’s Grand Prize, and Best Film–Climbing winner, shares the experience of “Gasherbrum II (located in the Karakoram Range of the Himalaya) in the middle of a deep, dark winter, as seen from the raw, honest perspective of alpinist and photographer Cory Richards. The film deftly captures the interweaving of pain, doubt, and fear — and reveals a harrowing descent that amplifies the isolation and exposure.”

Other prize winners include The Sun Behind the Clouds: Tibet’s Struggle for Freedom (Best Film–Mountain Culture) and People’s Choice Award On the Trail of Genghis Khan. Different films are showing each night- attend both screenings to watch them all!

Tickets are available for purchase at the customer service counter in Midwest Mountaineering for no service fee, or online for a $3.00 service fee per order. No online tickets sales the day of event.

The Banff Mountain Film Festival is suitable for children ages 7 and older. Some content and language may not be appropriate for younger children. Every attendee must have a ticket.

*Will-call tickets are available for pick-up (please bring your receipt)
**All ticket sales are final, there are no refunds.