You are here: Home / Indoor / Of Mirth and Mischief at The Fitzgerald Theater 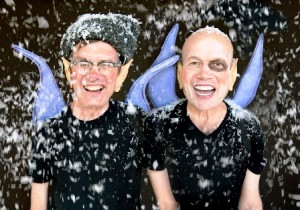 Although it currently feels like it is spring outside, the holiday season is certainly in full-bloom.

December 16th through the 18th, The Fitzgerald Theater will be hosting the brand new holiday play, Of Mirth and Mischief. Written by Kevin Kling and directed by Peter Rothstein, the play is an entirely original production commissioned by Minnesota Public Radio.

Of Mirth and Mischief is a kid-friendly adventure that will take you on a magical journey, exploring the world of the broken fairies and mischievous elves that rule the dusk and dawn. The story highlights playwright Kling’s recollections as a four-year-old boy in an extended-stay at the hospital, and the characters and tales his imagination created while he was there. With this in mind, the play is then told through the perspective of a young boy.

While you may go for the play, you should stay for the music. Steve Kramer, of the 1980’s group The Wallets, wrote new and original music for the production. Not only that, but he enlisted singer-songwriter Haley Bonar and James Diers (of the Minnesota-based band Halloween, Alaska) to perform the music for the play.

For more information, please visit the event page at The Fitzgerald Theater’s website. You can also download the entire soundtrack before attending the show online at Minnesota Public Radio’s website.