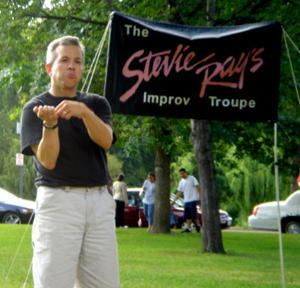 Stevie Ray is no dummy. He knows that in the summer time, people want to be outdoors as much as possible, so that’s where he took his comedy show.

Previously held at the Lake Harriet Rose Gardens, Improv in the Park makes its debut in Minnehaha Park this summer. With the bandshell stage, the venue has ample seating, and as a bonus, it’s close to the much-lauded Sea Salt Eatery.

Stevie Ray has been a fixture in the comedy improv scene in the Twin Cities for a long time, and is going on his 19th year of his Imrpov in the Park series. The show relies heavily on audience participation, is family-friendly, and best of all, it’s free.

These shows take place every Sunday at 5 p.m. and again at 7 p.m. through August 26th. You can come for the show, take a walk in the park, have a bite to eat at the Sea Salt Eatery, and enjoy the outdoors–basically make an afternoon of it.