You are here: Home / Free Stuff / Day 86: Exquisite Robot at Stevens Square Center for the Arts 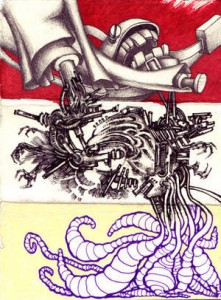 Rogue Citizen, a Twin Cities artist collective, is known for its nightmarish images of skulls, slimy creatures with oozing tentacles, dragons, and cyborgs and so on. This group of artists is responsible for Exquisite Robot, a show at Stevens Square Center for the Arts highlighting these surreal works of art.

“Exquisite corpse” was originally developed as a game played by prominent Surrealists such as Andre Bretón, Joan Miró and Man Ray in France. It involved folding a piece of paper into segments, each assigned a section of the body drawn by a different artist, unseen by the others until completion of the entire body. The artists of Rogue Citizen have embraced this format to explore their own 21st century paranoid visions.

These four emerging artists capture the terror and excitement of new possibilities with their shared passions for drawing, experimental imagery and abstraction, playing an old game for a new world. EXQUISITE ROBOT responds to the awesome potential of real technology, under the shadow of great science fiction and with respect to the imaginative force of the early Surrealists.

The show runs now through July 19.

Stevens Square Center for the Arts is located at 1905 3rd Avenue South in Minneapolis. Gallery hours are Friday through Sunday 1 to 5 p.m. during exhibits.