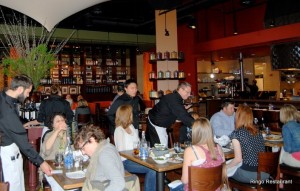 Sometimes you get fed up with cooking, right? It happens to me a lot in the summer time. I get lazy and just want to have someone else cook instead, so I look for a restaurant to take that burden off my hands for a night.

If this happens to you, you’re tired of the same old restaurants, and are in the mood to try something a little different, check out Ringo in St. Louis Park’s new West End Mall. You can find something to appease the tame as well as those of us with bolder tastes.

Ringo, so you know, has nothing to do with Ringo Starr, much to the chagrin of its patrons, but is named for its owner, Jim Ringo, who also owns The Forum in downtown Minneapolis.

The concept of Ringo is sort of a global-meets-local core menu of chophouse fare, salads, and comfort food with a twist, as well as a new menu from a different international destination each month. In June they’re featuring Belgian cuisine, and July will be South African, impeccably timed to coincide with World Cup soccer.

For those trying to steer clear of wheat gluten, Ringo has thoughtfully put together a gluten-free menu, and also a vegetarian menu for those with meat-free diets.

With cuisine that appeals to both conservative and adventurous palates, the global-meets-local concept works well and covers all the bases. And with a menu that changes as often as it does, chef Ryan Aberle does a very good job in focusing on one type of fare at a time, featuring it for month, then moving on to a new ethnic flavor-of-the-month. Literally. The idea is that favorites from the international menus will be added to the core menu, much like the Korean Fiery Soy Chicken and Korean Beef in a Stone Pot have been already. South Korea was the featured regional cuisine for the month of May. Next month a favorite or two from the Belgian June menu will likely be added, which is a great idea. It keeps the core menu fresh and gives the chefs and line cooks experience in many different culinary traditions.

Ringo serves lunch from 11 a.m. to 3 p.m. daily, with a menu of items that are more reasonably priced and portioned for lunchers.

Ringo is located at 5331 W. 16th Street in St. Louis Park. There is a convenient online map to help you find it.

Reservations can be made online through Open Table or on your mobile device with the Open Table app. You can also call (952) 303-5574 for reservations or information.