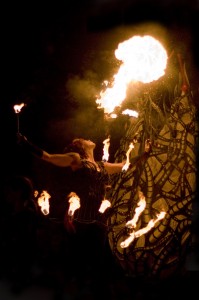 One of the more unique theater experiences in the Twin Cities would have to be Bedlam Theatre. A collaborative, interactive, and professional experience, Bedlam Theatre builds culture and community through and around experimental performing arts – and their audiences.

Bedlam Theatre was founded in 1993 by a group of artists to create original theater with a social conscience and explore collaborative ways of working. The theater is located at 1501 S. 6th Street in Minneapolis, right next to the Cedar-Riverside light rail station. Check the map for a visual.

Bedlam Theatre also has food and drinks available from 4 p.m. to close, Tuesday through Sunday evenings so you can enjoy a full menu of options before, during and after the show. There is whole slew of dining locations available, including a high-ceiling lobby, the dark and cozy Fireplace Lounge, the funky and intimate Living Room and second-story outdoor deck with one of the best skyline views in Minneapolis. There is a full menu available from the kitchen on which everything is made from scratch and with fresh local ingredients.

There is a whole host of upcoming shows to check out and become part of. Starting June 3 and running through June 13, catch Persephone: Reign of Fire, presented by Bedlam Theatre and The Infiammati Fire Circus. For dates, times, ticket information and such, check out the event page on Bedlam Theatre’s web site.

For nightly shows, there is also a monthly calendar page with a staggering number of options for shows this and every month. Many nights there is both an early and a late show.

The Bedlam Theatre strives to be a catalyst for creative risk-taking, to foster the development of new performing arts and performing artists, and to engage the community in the creative process. Once you’ve joined the loyal following, chances are at some point you’ll cross the line from seeing theater to being theater.