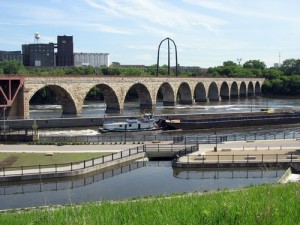 I don’t really fancy myself much of a runner. A lot of my friends run. Some even run insane distances like half marathons and even full marathons. I like to be fit, but running over 26 miles seems a bit extreme to me.

I think I’ve just put my finger on why I don’t fancy myself a runner.

Whether you’re a fan of running or not, this Saturday May 7th, join in a fun run that almost anyone can finish. The Stone Arch .5K will be held at 2pm on the bridge and will end at Aster Café. And in case you were wondering the decimal before the 5 is intentional. This is not a 5K, but a point 5K. As in half a kilometer, or about the equivalent of four city blocks.

Stretch out those hamstrings and line up for the run that ends at Aster Café, then hang around for pint-sized libations and load up on carb-infused appetizers at their special happy hour.

After you cross the finish line, anywhere between 2:03 and 2:15, celebrate your awesomeness with food and beverages. Raise a pint and toast a job well done.

This is an all ages event and it’s free to participate in the run, but food and drinks will of course be an extra charge.