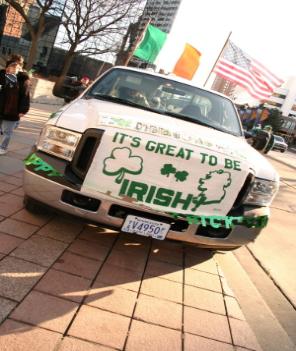 Yesterday, we mentioned a list of things to do in St. Paul on St. Patrick’s Day (Day 300), starting with a beer breakfast beginning at 8am, and continuing with a parade at noon and some fun throughout the afternoon.

The good news is you can start in St. Paul, then go to Minneapolis later in the afternoon and not miss a beat.

While St. Paul’s parade begins at noon, the one in Minneapolis doesn’t start until 6:30pm. The Minneapolis version of the St. Patrick’s Day Parade will begin at 13th and Nicollet, and march up Nicollet to 5th before it disperses. There’s lots of great places along Nicollet to catch the action.

We mentioned yesterday that in St. Paul, the crawl was actually 3 different crawls and that, unfortunately, it was closed to new signups. Well, the Minneapolis Leprechaun Pub Crawl, while also closed to signups, is much larger in scope. In Minneapolis, it’s actually 6 separate crawls. Hit ’em all if you want, but pace yourself and be responsible.

Again the Leprechaun Pub Crawl, officially, is closed to new signups, but join the crawlers anyway. A good time will be had by all. You won’t even miss the party favors.

While not officially part of the festivities, Blarney Pub & Grill is a favorite in the Dinkytown neighborhood. They’ll keep the green beer flowing and offer live music beginning at 6pm. Stop by and join in the fun.

Once again, we at 365 wish you a very happy and festive St. Patrick’s Day. Be safe and have fun!