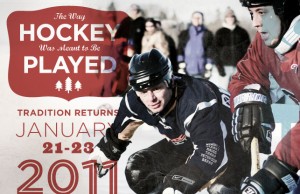 This is Minnesota. Makes sense the U.S. Pond Hockey Championships would be here, doesn’t it? I mean, what other state has so many ponds and lakes, and has such impressive winters as we do here in the Land of 10,000 Lakes (and ponds)?

The tournament gets under way this morning at Lake Nokomis. The site opened at 7am with late player check-in, then the puck drops on the first game at 8:30 sharp. Tournament play continues all day until 4:30pm, so you can stop by or come and go throughout the day. Then after that time, there are other non-tournament activities such as Boot Hockey and beer gardens.

Saturday, the schedule is almost identical to Friday’s schedule, then Sunday, the last day of the tournament, Rink Rat and Women’s Division play kicks off at 8:30am. The Boot Hockey Semifinals happen at 10:30am, and the rest of the day is taken up by Division finals and the Open Division Championship game is at 3:30pm, followed by and awards ceremony at 4:30. The warming house shuts down at 6pm, signifying the end of the tournament. For specific times for every activity and game, see the full tournament schedule.

For more details on divisions, facilities and general tournament information, visit www.uspondhockey.com, or “like” them on facebook at www.facebook.com/USPondHockey.