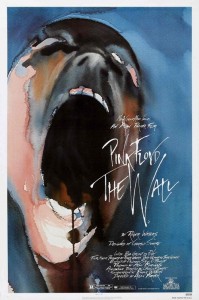 Sure, Halloween’s over now, but what’s wrong with a little freaksome fun?

Pink Floyd: The Wall is showing tonight and tomorrow at midnight both nights, at Willow Creek 12, 9900 Shelard Parkway in Plymouth.

The movie tells the story of a rock star named Pink (no, not the sassy female pop singer) who is sitting in his hotel room in LA, burnt out from the music business. He can only bring himself to perform with the help of drugs. Sounds pretty psychedelic, right? If you know anything about Pink Floyd, that shouldn’t surprise you.

Based on Pink Floyd’s 1979 masterpiece double album, The Wall, the story begins when Pink is a youth. He is crushed by the love of his mother, and is punished by teachers several years later due to his increased interest in writing poetry. Pink begins to build a wall around himself to shield him from the harsh world beyond.

An earlier Pink Floyd record, Dark Side of the Moon spent an unprecedented 741 weeks on the Billboard Hot 100 chart. Many think The Wall is better. If you’re a fan of the band, I’m sure you have an opinion as well. Share with us in the comments which record you think is better: Dark Side of the Moon, or The Wall.