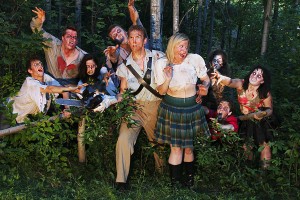 Pop quiz. What are the two best things about fall for a fan of the theater and all things theatrical? Give up?

The best thing, one could argue, would be the start of the fall theater season. The second thing, in my estimation is preparing for Halloween. There’s something decidedly theatrical about Halloween, with it’s costumes, decorations, parties, special effects, and scary movies. But when I think of the Halloween season, I don’t usually think live theater.

The show takes elements of Evil Dead, Evil Dead 2, and Army of Darkness and combines them for one of the most unique musical theater experiences ever to hit the stage.

The plot is familiar: Five college students go to an abandoned cabin in the woods (don’t they always?) and unwittingly unleash some crazy evil that turns them into demons. Then it’s all up to Ash, a housewares employee who adds “Demon Killer” to his résumé with his trusty chainsaw, to save the others and get out alive. Blood splatters. Body parts are lost. Demons tell bad jokes. And it’s all set to music. Sound like a great time?

The show is intended for adult audiences only and contains graphic language (and lots of blood). Evil Dead The Musical is showing at Illusion Theater (directions and parking). For more information about the show, visit www.evildeadthemusical.com.