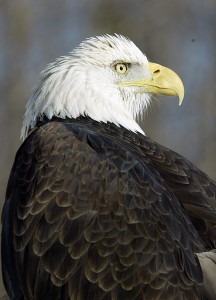 Contrary to what Michael Crichton may lead you to believe, a raptor isn’t just a scary, carnivorous, 6-foot tall, pack hunting dinosaur with razor-sharp six inch retractable claws and teeth to match (OK, so I’ve seen Jurassic Park a zillion times. So sue me). It’s an abbreviated name for Velociraptor, true. But the naturalist definition of a raptor is a bird of prey, and includes eagles, hawks, owls, falcons, buzzards, swifts and the like. They are characterized by sharp vision (thus the term “eagle eye”), powerful beaks and sharp talons for grabbing prey.

In fact the Velociraptors of the late Cretaceous Period were so named due to their bird-like movements and the fact that they were feathered. Oh, and by the way, Jurassic Park was full of anatomical inaccuracies about them. Besides the Velociraptors of Jurassic Park not having feathers, they were also portrayed as being much bigger, and possibly a lot smarter than they actually were. They were about the size of a turkey, according to they skeletons that have been discovered. But I digress.

The raptors held at the University of Minnesota’s Raptor Center aren’t scary dinosaurs, but are large, carnivorous birds, which are equally as awesome.

The Raptor Center was established in 1974 at the University of Minnesota College of Veterinary Medicine and specializes in the medical care, rehabilitation, study, and conservation of eagles, hawks, falcons and owls. The center treats about 800 birds a year and provides training in raptor medicine and surgery for veterinarians from around the world. In fact, they reach about a quarter of a million people each year through education programs and events.

One of the biggest and most well attended events throughout the year is the Spring Raptor Release, an annual event in which rehabilitated birds are released. Earlier this spring, birds were brought to Hyland Park Reserve and let go in front of a crowd of spectators. The same thing is planned again for next spring, but as of this writing, we are unsure of the location.

As you may imagine, the birds being treated form a bond with those who care for them. This makes treating them…well…a treat. But when they’re ready, the birds’ instincts take over and they fly free.

The Raptor Center is open to the public Tuesday through Friday from 10am to 4pm and Saturday and Sunday from noon to 4pm For more information, call (612) 624-4745 or e-mail raptor@umn.edu.