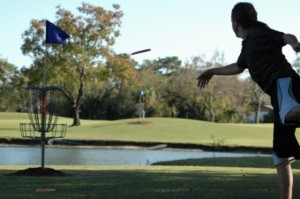 The first known accounts of people playing golf with flying discs date back to 1926. In Vancouver, BC a group of school kids played golf with tin lids, which they appropriately dubbed Tin Lid Golf, and played on a makeshift course on the school grounds. The proliferation of the sport didn’t happen until after the first professional model of the Frisbee® by Wham-O was sold in 1964. During the 1970’s, organized disc golf leagues began popping up all over, even though for decades the game had been played with pie tins, lids and other things.

Disc golf is one of those activities I’ve always associated with fall. There are several places to play in the Twin Cities.

The game itself is played with basically the same rules as regular golf. You “tee off” and try to get to the end of the course in the least amount of “strokes” possible. The strategy is similar. In “ball golf”, you have to play the wind, slopes in the course, and avoid sand traps and water hazard. Disc golf requires less of those things to deal with, but also most parks offer the sport without the green fees, which makes it easier for more people to participate. Sure it has some of the same joys and frustrations, but generally disc golf is easier to participate in than golf.

Disc golf, sometimes called Frisbee Golf, or even abbreviated as Frolf, is a great way to enjoy the fresh air outdoors, and provides a low-impact activity for anyone. As I mentioned, there are many places in the Twin Cities to participate. Following is a list of parks that offer disc golf:

For a complete list of Minnesota courses, go here.
For more information about the sport of disc golf, visit www.pdga.com.