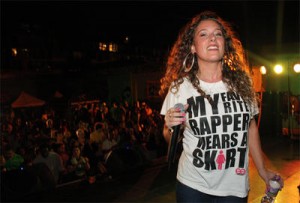 The Twin Cities has been mentioned repeatedly in the blogosphere as being a major force in underground hip hop. With names like Brother Ali, Atmosphere, Eyedea & Abilities, P.O.S., Heiruspecs, and others, there is good reason our scene has gained some cred in the national spectrum of hip hop artists. The Rhymesayers Entertainment record label and the momentum toward national and international prominence of the Doomtree Collective artists have catapulted the Twin Cities into the spotlight.

It’s impossible to mention Twin Cities Hip Hop without a nod to Dessa, a rising star and local female emcee.

Right now at Intermedia Arts in Minneapolis, you can catch B-Girl Be, a celebration of women in hip hop. Ongoing throughout the celebration until September 18th, is Sideshow, an interactive visual art exhibition where seven Twin Cities-based artists use the distinct aesthetics of hip-hop to mirror, stencil, sketch, paint and project a multi-dimensional landscape and interactive game gallery exploring power, self, identity, and sexuality.

This weekend, you can see the Carnival Dance Showcase, featuring dance creations from the Twin Cities’ most renowned rising and established hip-hop dancers and choreographers, along with incredibly talented guest artists from across the nation. The showcase is curated by Amy Sackett and runs through Sunday September 5th. Also on Sunday, catch Flava Tamers, featuring the very best of the Twin Cities’ rising hip-hop dance stars.

Friday night September 3rd at 10pm is Soothsayers: Spoken Word at The Sugar Shack. This is a night of poetry and soothsaying by Twin Cities spoken word poets, and is curated by Desdamona.

At 8pm on both Friday and Saturday nights, get your groove on with the Beat Contortionists. See dance creations from the Twin Cities’ most renowned and established hip-hop dancers and choreographers, along with incredibly talented guest artists from across the nation. Also on Saturday night is a freestyle showcase called DeCipher. This showcases the very essence of hip-hop dance: the ability to freestyle in the cipher.

Finally, the culmination of the entire festival happens Saturday the 4th from noon to 10pm, as the B-Girl Be Carnival Block Party gets underway. The B-Girl Be Carnival Block Party is a one-of-a-kind festival that runs all day and into the night to bring international, national and local female hip-hop artists together at Intermedia Arts for music, dance, live mural painting, film and an art marketplace. There will be lots of music, dance, graffiti art, workshops, performances, and a DJ spinning. The evening performance from 6 to 10pm will be Vocal Acrobatics, a spectacle of lyrical dexterity that pits feminine against masculine prowess in the ultimate battle. You can get tickets for Vocal Acrobatics online ahead of time for ten bucks a pop.

Intermedia Arts is located at 2822 Lyndale Avenue South in Minneapolis.

For more information including the cost and times of each event, visit www.intermediaarts.org.