The Minnesota State Fair is in full swing as most of you know if you’ve been following along the last couple of days. We featured an overview of the Fair on Thursday for opening day, then yesterday featured some of the foods that keep people coming back.

Today, we move on to the heart and soul of any fair: The Midway.

The Midway is where most of the fun happens for adventurers and thrill-seekers. The extensive list of rides, several new this year, will prove to be a big draw to folks from all over. 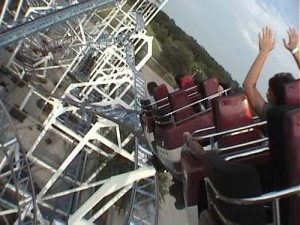 The Wind Storm Rollercoaster is new to the Minnesota State Fair this year. It’s always fun to discover new thrills and this twisty, turny, fast, and fun coaster will lead the way to provide those thrills. Of course, if you’re new to the State Fair this year, it will all be new, at least in this setting. If you indulge in the deep-fired cheeseburger from Axel’s that we mentioned yesterday, however, you may want to give it a little time to settle before taking on this coaster. You have been warned.

Another new ride this year is the Hard Rock. This ride has one big arm that swings back and forth, to which a wheel is attached, which revolves. The rider sits in seats on the spokes of these wheels. So you’ve got your basic swing & spin motion. Remember what I said about the cheeseburgers? Same goes for this thing. You think I’m being funny, but I’m not. I went on the Gravitron once after eating fair food. If you’re familiar with the Gravitron, the only thing that keeps you in place are G-Forces. I think you can fill in the blanks. I kept everything down, but I felt like death. Take my advice. Wait. Or better yet, ride first, then eat. 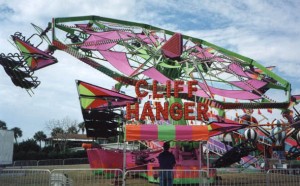 Besides the new things on the Midway this year, there are some old favorites as well. The Ferris Wheel is always a favorite among both young and old. Also, the Tilt-A-Whirl. Those are well known because most fairs have them. A few things that have been around a while may have flown in under the radar. The Cliff Hanger has been at the Fair before. Instead of sitting you’re lying on your belly, more or less, and a big sail-shaped attachment hovers above you, giving the illusion that you’re hang gliding.

Another ride returning to the Minnesota State Fair this year is the Starship 3000, which is not unlike the aforementioned Gravitron. I’ve not tried the Starship, so I’m not entirely sure if it’s only gravity that holds you in place or not, but otherwise it appears similar. You enter a big spaceship, find a spot, then comes the spinning and hilarity ensues. Unless you’ve just eaten a deep-fried cheeseburger or gorged yourself on cheese curds. Then there’s no hilarity.

Another ride making a recurring appearance at the Great Minnesota Get-Together is The Orbiter. How fun does this thing look?

Of course, it isn’t just about the grown-ups. There’s lots of rides for the kiddies as well. All the favorites are there this year, including the Expo Wheel, Daytona, The Quad Runner, Safari Train, Baja Buggy, Kiddie Bumper Boats, Winky the Whale, The Monkey Maze Glass House, The Speedway, Jumping Star, the Merry-Go-Round, of course, and much more. Remember due to ride mechanics and safety factors, there are minimum/maximum height requirements for many of these rides.