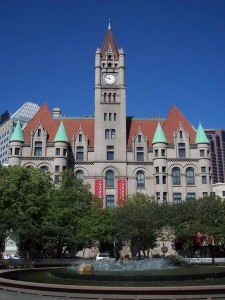 It seems that businesses are so focused on getting more people through their doors on Monday and Tuesday nights, because those are traditionally slow nights. The result, of course, is that there are so many cool things going on those nights that sometimes days later in the week get neglected. It’s so much easier to find something cool to do on a Monday or Tuesday than, say, a Thursday.

Thursday evenings through August 12th, the Ordway Center for the Performing Arts and several partners team up to turn Landmark Center Plaza into a venue for dance of all kinds. The downtown St. Paul spot at Market Street and West 5th Street features a night of dance, highlighting a different genre each Thursday. Also offered is instruction in that particular type of dance and then an opportunity to show what you’ve learned to music by live local artists. So first, you learn. Then you show off what you learned and get a chance to practice. Sound like fun?

Dance forms featured include tango, disco, swing, salsa, cajun, and country. This Thursday, July 29th is Rock ‘n’ Roll night. The evening kicks off at 6pm with instruction by Arthur Murray Dance Studio, followed by live music from the Rockin’ Holywoods from 7:30 until 10, giving you some time to practice what you learn and strut your stuff.

Beer and wine is available for purchase starting at 5:30, so you can come early and mingle with other movers and shakers before class is in session.

August 5th, the schedule remains the same for Ballroom Dance night. Cinema Ballroom will provide instruction and live music is by the Jerry O’Hagan Orchestra.

The final day of the series is August 12th and will feature Reggae and World Beat music. Kenna Sarge will be on hand for dance lessons followed by the New Primitives providing live music until 10.

Also as part of the dance series, you can come back Friday night for dance-themed movies. The movie featured Friday night will highlight the genre of dance from the previous night. How cool is that?

So this Friday the 30 after Rock ‘n’ Roll night, the featured movie is Footloose (1984), starring Kevin Bacon, Lori Singer, and John Lithgow.

Finally, to bring the series to a close, Sabar will be shown on August 13th, following that Thursday’s Reggae/World Beat night. Sabar is a coming of age story of a girl with hip-hop flavor discovering herself through her reluctant discovery and practice of her native Senegalese dance, Sabar.

The Friday night movie series is held in Central Library’s Kellogg Blvd Courtyard each Friday at 9:30pm. The series is presented by the St. Paul Public Library system.

Both the dance nights and movies are free and open to the public.

For more information about the series, visit www.ordway.org/summerdance.