You are here: Home / Indoor / Cinderella at The Ordway 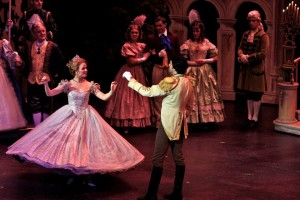 Rodgers and Hammerstein’s Cinderella premiered as a live television special starring Julie Andrews in 1957. At the time it was the most widely viewed television program in the medium’s history. It has since been produced as countless stage productions, and James Rocco’s version on the Ordway stage lives up to the show’s legacy.

In a slightly modernized version of the tale known to millions, Prince Christopher is being badgered by his mother to find a bride, but he wants to find the perfect girl according to his own timetable. And in another part of the kingdom, Cinderella is dreaming of a life outside of the world of her domineering step-mother and crass step-sisters. What unfolds is a world of song and enchantment endearing to those of all ages.

Jeremiah James, familiar to Twin Cities theater-goers as the Beast in Ordway’s production of Disney’s Beauty and the Beast, is perfectly cast as the gentlemanly and handsome prince of Cinderella’s dreams. His rich voice stands out among an ensemble of many talented actors.

Minneapolis native, Tonia Hughes, brings sass and confidence to the role of the Fairy Godmother, forcing Cinderella believe in herself before magically transforming a “plain country bumpkin” into the most beautiful girl at the ball.

Cinderella is played by Jessica Fredrickson, also from the Twin Cities, and her sweetness and elegance is a striking contrast to her not so-much-evil-as boorish and crude step-family, which includes Greta Grosch as her brassy step-mother, and Andrea Wollenberg and Colleen Somerville as her step-sisters, who pepper the show with outrageous comic moments.

Cinderella at the Ordway runs now through January 1. Tickets are $27 to $118 and can be ordered online or by calling the Ordway Ticket Office at (651) 224-4222. For performance schedules, membership information and ticket pricing, go to ordway.org.

The Ordway, recognized as one of America’s leading not-for-profit performing arts centers, is home to a wide variety of performances throughout the year that encompass the finest in musical theater, world music, dance, and vocal artists.