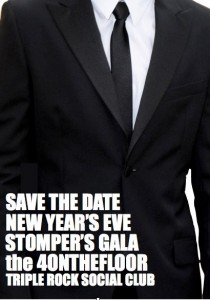 Want to go out for New Year’s, but not a fan of the stereotypical club scene? If you’re looking to avoid ridiculously high covers, deafening music, long lines and crowded clubs, preserve your sanity (and your wallet!) with these New Year’s festivities.

This New Years’ Eve, one of our favorite venues is hosting a party featuring one of the hottest bands in the Twin Cities right now: The 4onthefloor, who “deliver stompin’ blues at an alarming intensity,” according to their Facebook bio. The night begins at 7:30pm and goes on into the night. Catch the band with MANY special guests. Get your ticket online for $15. The night will be classy. Formal attire is recommended and encouraged.

Join Uptown Cafeteria as they host a “NYE Make-Out Masquerade Ball,” featuring DJ Josh McLovin and a Champagne Toast at Midnight. Flag down a shot girl for 2 for 1 shots, dance, party, and enter for a chance to win some fantastic prizes for best mask, best kiss, best resolution, and more! No cover, DJ and dancing begins at 10 pm.

Listen to some killer music from I Self Devine, Carnage, Conflict of Interest, and Out of the Box DJs (That Dude Trey & Frank Castle). Nothing goes better with killer music than killer beer: enjoy your favorite craft and tap brews with 2-4-1’s from 9 – 11 pm. This is a 21+ event, admission – $7, begins at 9:00 pm.

Join the 331 Club for “WHOOMP (There It Is) VII: Early ’90s Dance Party! – NEW YEARS EVE Edition” as they celebrate an era remembered for its terribly awesome television programming. You’ll want to get in the spirit and don your best 90s garb because prizes will be given for the best costumes. Enjoy this tribute to the 90s with music from Dr. Dallas Dog-Palace, MC Hang Time, and the triumphant return of DJ Tanner! No cover, event begins at 10:00 pm.

If you are looking for a classy, sexy and queer-friendly event, check out Hell’s Kitchen’s “Grown and Sexy New Year’s Eve.” Enjoy a rockin’ dance party featuring music from DJ Shannon Blowtorch, Nadine DuBois, and Sweetpea punctuated with performances by the hottest burlesque and drag performers of the Twin Cities at the top of every hour. Let yourself become mesmerized by the delights of Mistress Victoria DeVille, Switch the Boi Wonder, Randy Dandy, and the infamous Foxy Tann. This is a 21+ event, admission – $10, begins at 9:00 pm.